Yogi once said, “Little League is great because it keeps parents off the streets”
Boy, was he ever wrong.

If you missed Tales from the Blue, Part I, just click here to visit. We posted it here on The Writer’s Village on May 24th.

Welcome back for Part II. 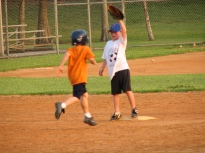 Tales from the Blue, Part II

It was the top of the seventh and in this particular little league series, the seventh is the last inning. The away team is down 1 run.

Damien’s behind home plate, as usual; Michael, my arch angel, out field, blue nephew is behind the pitcher.

The pitcher winds up, delivers and the batter hits it to the second baseman’s left side.

The first baseman gets some strange notion that he might be able to make the play and runs way into the second baseman’s field of play. The second basemen sensing that he has been cut out of the play, at least has the common sense to go to first.

Michael said the pitcher was brain-dead and never even moved to help out at home.

He’s kick boxing his legs, he’s balleting his feet, and he’s tap dancing all over trying to hit the bag.

The opposing team’s coach cries for an appeal.

The batter is safe. Game’s tied up!

The away team goes on to score another two runs and they’re now up by two.

As the sides change, the home team manager walks onto the field to confront Michael about his call. Damien sees it immediately. Michael is looking away, and Damien flies across the field to cut off the home team coach before he reaches Michael. He reminds coach that he is not allowed onto the field – nor did he make any request from the sideline to speak with a blue. He ushers him off the field.

The coach’s grumblings turn into a yelling frenzy. Damien tells coach this is his last warning to get back in the dugout before he is ejected. Obscenities fly as he walks off – and Damien throws him out of the game.

Damien soars to both dugouts giving each team a warning to settle down now or the game will be called. Things get back under control.

The inning gets played, the home team scores three runs and wins the game.

As Michael and Damien walk off, Michael says to Damien, thanks for saving my ass out there.

No sweat, Damien says. You would have done the same for me.

The morale of this story is: No matter how good or bad the call, shit happens, scores change, and it’s the umpires who ultimately have to win.